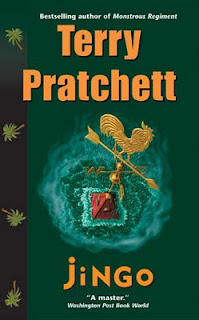 Ten years after the fall of the World Trade Center, there are two particular moments that stand out for me. One was the bewildering electronic sign on rt. 76 in Philadelphia which read “AVOID MANHATTAN”. The other was the reaction of one of my coworkers at the time, who astonished me by immediately pinpointing al Qaeda (which I’d never heard of) in Afghanistan, and who then offered her response: “Nuke them. Nuke them all!” (And, yes, she clarified that she meant the entire country.)

Then I remember the flags. The flags that divided the world into Americans and everyone else. I couldn't help noticing that “everyone else” included a lot of actual Americans...

Jingo by Terry Pratchett (HarperTorch, $7.99)
In which a crime is disguised as an act of war.

The Anatomy of Peace: Resolving the Heart of Conflict by the Arbinger Institute (Berrett-Koehler Publications, $16.95)
In which parents of difficult teens (and anyone else who’s listening) are given an object lesson: The same interactions -- from domestic to international -- become wildly different depending on whether you see someone as a person or as an obstacle.

[The Anatomy of Peace is also among Nif's April 2010 Picks.]

[Shine, Cocomut Moon is also among Jen's April 2010 Picks and Janet's May 2010 Picks and is the Young Adult Book Discussion selection for this month!]

Peace Week in Miss Fox's Class by Eileen Spinelli (Albert Whitman & Co, $16.99)
In which amazing things happen when students take time to think before they speak.

One more book that really belongs on this list is Fire Logic by Laurie K. Marks (currently out of print but due out in January in a 10th anniversary reprint from Small Beer Press): in which characters who should be enemies work instead to wage peace.