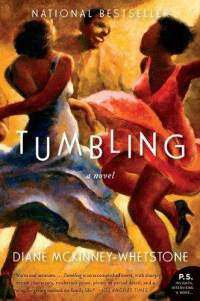 What with all the jibber jabber about Paris in the pages of recent indie bestsellers, I got to thinking about Philly and how it rarely gets top billing as the star of those kind of Eat, Pray, Love type books—as the romantic city so steeped in literary history and gastronomic inspiration that it can shake a life to its foundations and EFFECT GREAT CHANGE. It more often has a supporting role as the backdrop of a gritty crime drama. But here are five books where Philly and its neighborhoods get the star treatment, where like the New York City of Sex and the City, it gets to play the all important “fifth lady” in a stellar ensemble cast.

Tumbling by Diane McKinney-Whetstone (Harper Perennial, $13.99)
“The black predawn air was filled with movement. Its thin coolness rushed through the streets of South Philly, encircling the tight, sturdy row houses.”

Love Walked In by Marisa de los Santos (Plume, $14.00)
“…Mr. Fringer inclined his head to shoot a look over the tops of his glasses at us. His shop was not one of the truly elegant ones on Pine Street, no mint-condition eighteenth-century writing table posing tiptoe like a ballerina in his window. No mint-condition anything. But a good shop—my favorite.”

The Corrections by Jonathan Franzen (Picador, $16.00)
“Here in the heart of Chestnut Hill, needless to say, the sheet-metal currency of Neverest and Western Civil Defense and ProPhilaTex signs in every front yard was backed by the full faith and credit of floodlights and retinal scanners…but elsewhere in northwest Philly, down through Mount Airy into Germantown and Nicetown where the sociopaths had their dealings and dwellings, there existed a class of bleeding-heart homeowners who hated what it might say about their “values” to buy their own security systems…”

In Her Shoes by Jennifer Weiner (Washington Square Press, $15.00)
“The sum total of her big-screen experience might be the three seconds that a sliver of her left hip was visible in Will Smith’s second-to-last video. And she might be just barely bumping along, while some people, namely her sister, Rose, went whizzing through Ivy League colleges and straight into law schools, then into law firms and luxury apartments in Rittenhouse Square like they’d been shot down the water slide of life…”