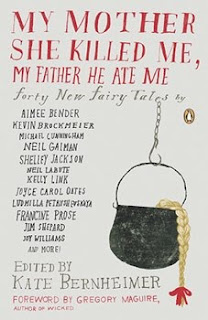 Nothing says fairy tale like a prince getting married. On April 29, H.R.H. Prince William will wed Kate Middleton, or as I like to call her: Milady Trench Coat. Wills, why didn’t you wait for me? I waited for you. When you were four and I was ten I decided not to make my move until all of your adult teeth came in, and this is how you repay me—me, the Parker-Bowles to your Prince Chuck? I’m not saying you have to jilt your bride or abdicate or anything, just hit me up on Facebook when you’re free.

My Mother She Killed Me, My Father He Ate Me, ed. Kathryn Berheimer (Penguin, $17.00).
‘Cause isn’t that what always happens in fairy tales, killing and eating? Contemporary authors like Neil Gaiman and Joyce Carol Oates drop breadcrumbs and invite you to follow the trails of their deliciously witchy short stories.

The Bloody Chamber and Other Stories by Angela Carter (Penguin, $13.00).
Remember that time I married that dude and moved into his house and he was all: “Erica, you can go anywhere except that one room,” and I was like: “uh, alright,” but then he went away on a business trip and I totally went into that room and then disappeared for a bit only to be replaced by what you suspect is some sort of clamoring haint in a gelatinous facsimile of my former body?

Ash by Malinda Lo (Little Brown & Co, $8.99)
A Cinderella retelling that I wanted to like more. There are sinister fairies and a cool stag-slaying Huntress and usually that’s enough to sell me. But there was something missing. Maybe it was those damned Disney door mice. Remember the chubby one that called her Cinderelly? Ah, good times.

Kissing the Witch by Emma Donoghue (Harperteen, $11.99)
Donoghue’s latest offering Room is itself a dark fairy tale cast in the trappings of present-day abduction and captivity narratives. Kissing the Witch meditates on more traditional fairy-tale characters, however. Its 13 interwoven stories dovetail seamlessly from one to the next as old heroines awake in new skins.

The Rose and the Beast by Francesca Lia Block (Harperteen, $8.99)
Props to Maleka for introducing me to Block. Her Weetzie Bat series is a quirky, modern-day fairy tale set in a Los Angeles full of “slinksters,” ducks and dreams. The Rose and the Beast reinvents the lives of nine famous fairy-tale heroines in modern landscapes that manage to retain their magic through the transformative beauty of Block’s prose.