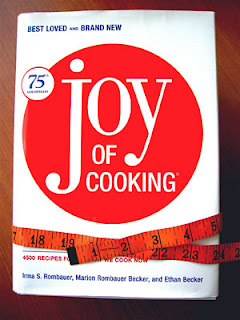 Joy of Cooking, 75th Anniversary Edition by Irma von Starkloff Rombauer (Simon and Schuster, $35)
An oldie but a goodie. Did you know the author of the Joy of Cooking comes from St. Louis where Mo grew up? True story. Also it was originally written during the Depression and included tips on how to cook possum and road kill because that is how bad the Depression was. Today's edition doesn't have much to say about possum but it does have recipes for pretty much everything else including my favorite dairy-free chocolate cake recipe (p.723) and the recipe I use to make clotted cream for my tea parties celebrating Britain's National Health system (p. 1040, you start with raw cream). I've also never managed to come up with a produce item that you can't find in the index, including jicama, pawpaws, and cherimoya or "custard apple" a fruit I learned about from the book. If you haven't looked at this classic in a while, it's time to revisit it. I think if I were trapped on a desert island where I had to cook five course meals morning noon and night and I could only take one book, I would take this one. It just has everything.

The Star Wars Cookbook: Wookie Cookies and other Galactic Recipes by Robin Davis (Chronicle Publishing, $18.99)
I don't actually know much about Star Wars, nor have I actually used any of these recipes but I do know a great food-related Star Wars pun when I read it and this book is full of them. Boba Fett-uccine, Han-burgers, and Hoth Chocolate...also the photos by Frankie Frankeny make the food look pretty good...and fun.

The Vegetable Dishes I Can't Live Without by Mollie Katzen (Hyperion Books $22.95)
I don't really use Mollie Katzen's Moosewood Cookbook but I do use this book all the time. She's really great at thinking of ways to enliven classic recipes--like her Potato, Carrot, Turnip Gratin. How were there ever potato gratins that didn't include turnips? She's also great at explaining how to cook veggies using simple methods to bring out all their essential flavors.

Artisan Bread in Five Minutes a Day: The Discovery that Revolutionizes Home Baking by Jeff Hertzberg and Zoe Francois (St. Martin's Press, $27.99)
The basic secret of this book is that it teaches you how to make a really wet dough in huge quantities that you can store in the fridge for weeks (see p. xi, "THE SECRET"). Based on this recipe there are tons of baked goods you can make, including pizza and some really awesome cinnamon rolls.

Ben and Jerry's Homemade Ice Cream and Dessert Book by Ben Cohen and Jerry Greenfield with Nancy Stevens (Workman, $ 9.95)
It is hard to find good ice cream recipes. These are pretty great ones. Let it be known that if you make Sweet Cream Ice Cream recipe number 2 (p. 29) using the Organic Valley Half and Half from the Co-op you WILL get a tummy ache and you WILL enjoy it. Ben and Jerry also teach secrets like how to put things like candy and chocolate chunks into your ice cream without them all sinking to the bottom and how to convince people who live in cold climates that they need to eat ice cream year round.