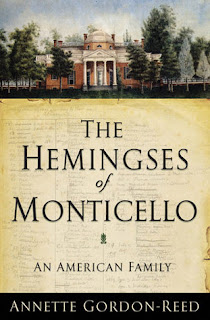 The Hemingses of Monticello by Annette Gordon-Reed

Thomas Jefferson: impregantor of his enslaved half sister-in-law and clingy extrovert. That is the portrayal that Annette Gordon-Reed concocts from the documentary material and the perspectives of the enslaved people in his life. The scanty lack of the former in the voice of the latter forces her into impressive acts of empathy and many such constructions as "He would have.." "She would not have..." But the work definitely earns its Pulitzer by doing so with such skill and illuminating a subject we kind of dimly know about but are missing a lot of important details. Chiefly the fact that this affair(?) between societal unequals lasted for decades, and followed the death of Martha Jefferson, Sally Hemings' half-sister.

Gordon-Reed manages to avoid either canonizing Hemings and her famiy or robbing them of all agency, leaving us to ponder the fact that her brother James committed suicide soon after freedom, or that either James or Sally could have had their freedom decades earlier during their brief time in Paris (Paris courts never refused a freedom suit.) Gordon-Reed does not argue in either of these or any other cases that this shows the beneficence of slavery or Jefferson, but she doesn't reduce her subjects to diversity month cutouts either. She points out other cases such as an enslaved woman who gets her white lover to buy her and live with her openly, and as a free woman. She makes the amazing observation that Jefferson would have had far less wealth if his father and law had to leave property to his enslaved sons, instead of just his white daughter. Similarly, Jefferson's daughters benefited materially from Jefferson taking Hemings as a "substitute for a wife" instead of marrying a woman who could have made any legal claim on him.

The best defense of Gordon-Reed's method, and the most lasting wisdom comes in her saying that the truth can be known by how it illuminates while lies are bound to obscure. This would seem to have application long beyond turn of the 19th century Virginia.

Reviewed by Jesse Bacon
Posted by Maleka at 9:40 AM